The local newspaper „Periodico El barrio“ will publish on 5th January 2014 an interview with me led through the director Marcelo Benini.

This monthly newspaper was the beginning of „Die Papierfabrik“ in February 2003, as I met along the street in the quarter the journalist Ignacio, who was fervid interested to write about my story…and the rest you know! Since then this newspaper has always paid tribute to me in my projects. The edition of the newspaper reaches around 60’000 readers in 5 districts of Buenos Aires.

Watch out for my interview, it will be in spanish: 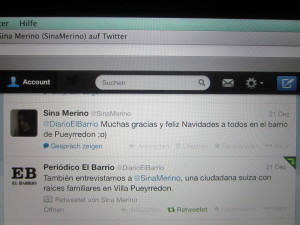